Snjezana Pohl is both a doctor in general medicine and in dental medicine. She obtains a specialization in oral surgery, periodontology, and implantology.

Although she studied, specialized, and worked in Germany, she is from Croatia and currently based in Rijeka, where she practices, teaches, and mentors.

Dr.Dr. Pohl graduated in Medicine at the School of Medicine, University of Zagreb, Croatia and obtained her medical doctorate in 1987. For two years, Dr. Pohl worked in general surgery and orthopedics in Munich, Germany.

In 1997 she graduated from dentistry at Ludwig-Maximilian-University, Munich, Germany and obtained her specialty in Oral Surgery in 2003 at the same university. She acquired her doctorate in dentistry at the University of Cologne, Germany in 2002 and in the same year, Dr. Dr. Pohl obtained her specialization in Periodontology and Implantology from the European Dental Association (EDA).

For over 13 years, she was the co-owner and practiced oral surgery at the Clinic for Oral and Maxillofacial Surgery in Starnberg, Germany.

Since 2010, she is partner at Rident Clinic, Croatia, and head of the Department for Oral Surgery. She also teaches as an assistant professor at the Department of Oral Medicine and Periodontology at the School of Dental Medicine of the University of Rijeka.

Since 2015 she lectures worldwide and became a DentalXP expert. She is also a researcher and published numerous articles in scientific magazines.

In 2020, she published her app to share knowledge and to help practitioners around the world in this specialized field. She brings to the attention that there are no sponsors or companies behind the app, only her own time, dedication, and passion. The procedures in “Decision Matters” are based on what she have found to deliver the best most predictable results. She has included the literature behind, because she believes that it is important for any practitioner to understand the science too.

In more than 20 years of experience, she has covered the entire spectrum of oral surgery and periodontology but implant surgical procedures in the esthetic area has always been her focus of interest. From early on in her career, she realized just how collapse prevention is superior to reconstruction and that nothing compares to the results achieved by using autologous tissue.

This meant that she was an early adopter of partial extraction therapy, seeing the value in dentin autograft, tuberosity tissue, and osseodensification. In 2003 she started to combine hard and soft tissue augmentation techniques to treat the Socket Type 2 and 3 and so mIVAN technique was born. In 2020, long term results of up to 11 years with mIVAN technique was published.

This course on implant surgical procedures focuses on the hard- and soft tissue enhancement around implants in the esthetic region. Snjezana Pohl has designed a hands-on course which covers basically all grafting procedures that you need to achieve outstanding success in anterior implants and esthetics. Thorough treatment planning, clear decision guidelines and the biologic superiority of autogenous tissues are more key aspect to explore …

What Customer says about Snjezana Pohl

Dr. Pohl teaches down to earth information, that are real life situations, and that can be applied to your daily practice. She also presents her material with all the scientific foundation done by her and by other researchers. She can teach all levels of expertise in the same setting. 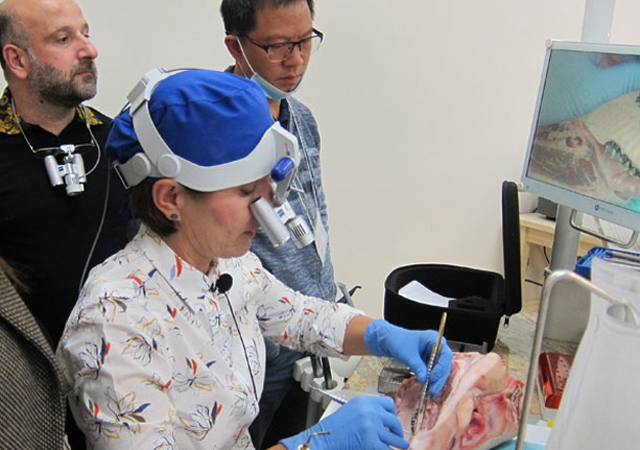 "Dr. Pohl is one of the Greatest Teachers that I have met during my educational career. She influences her wonderful spiritual personality through her true smile and gives all her knowledge to all her students. Great Teacher."

"In 16 years of dentistry, I have not attended such a well-structured, clear, and valuable course. Snjezana is a wonderful teacher, passionate about her work, and an excellent communicator; as well as a world-class implantology’s. I would come back in a heartbeat."

I would like to thank Dr. Pohl for sharing so many insights of her clinical knowledge with us. She is skilled, bold, enthusiastic, and has tons of patience. Her clinical decision-making is biologically based and thoughtful. I have enjoyed learning from her in the past 4 days. I will recommend her course to my colleagues. It is another great course that is offered at IDEA.

"Dr. Pohl is one of the most talented surgeons in the world. Her insight and "Robin Hood" methodology when it comes to the use of autogenous tissue is remarkable. Implementing techniques on Monday is only possible due to her lecture and hands-on teaching methods. Absolutely a 'must take' course for anyone looking to provide optimal care to implant patients."

Dr. Pohl was amazing, took time and explained things very well at a pace that I could be digested. Highly recommend her as an outstanding surgical educator